Basil A
Basil is an experienced violinist; currently, he is studying under Patinka Kopec at the Manhattan School of Music. He’s played worldwide as both a soloist and an orchestra member and prides himself on offering the best advice possible. He’s also an experienced transcriptionist and knows all of the ins and outs of musical theory.

Latest posts by Basil A (see all)

A fretted cello is exactly what it sounds like – a cello with frets. Unlike guitars, bowed string instruments like violin, viola, cello, and double bass (standup/upright bass) do not have frets on them. However, in recent years some ambitious musicians and instrument makers have experimented with putting frets on instruments that do not have them typically – like the cello. These instruments are not widely used – their application is limited for a variety of reasons this article will explore – and they are really just novelties. It is safe to say that there are no professional classical musicians who use fretted cellos and hardly any professional cellists from other genres either.

Surprisingly, frets on bowed string instruments were not always verboten. Many may find it surprising to learn about an instrument called the “viola da gamba,” or “gamba” for short. This instrument was popular during the Renaissance and Baroque eras of music during the 17th and 18th centuries – 300 to 400 years ago! The gamba was not an “early cello” or “pre cello” as some might think. Both instruments existed in their forms at the same time.

There are even several different sizes of gamba that are different instruments. But, someone who doesn’t know what the gamba is might assume someone playing one is playing the cello. The player holds the instrument in a similar way between the legs, as opposed to under the chin or any other way close to that like a violinist would.

Why is the gamba relevant to this conversation? Because it is one of the only bowed string instruments that was made to include frets. The frets were not made of metal like you would have on a guitar, but they were instead made of gut string, so a somewhat similar material to what the strings of the instrument were made out of.

(Side note – gut strings are what all stringed instrumentalists used before the invention of nylon and metal strings like we have today. Gut strings were made out of sheep gut, which is exactly what you think it is. How far we’ve come!)

There is an advantage to having frets that were tied on instead of built into the fingerboard of the instrument – you can move them around. This mattered especially to people who played music in the Renaissance and Baroque eras, before musical intonation was standardized to equal temperament. (More on that later.)

Why did gamba players stop putting frets on their instruments? They didn’t! If you go to an early music concert of music from that time period, you will see gamba players and they will have frets on their instruments. As previously said, the gamba was not a predecessor to the cello in any way – they existed independently of each other. However, as music advanced along, concert halls became bigger, and people wanted louder music.

The gamba was left in the Baroque era along with lots of other wonderful instruments, while the cello was experimented with to create a louder sound that people were looking for. In the 20th century, there was a period of early music revival and the gamba and all of the other instruments were “re-discovered,” and now there are professional musicians who only play the gamba and the music that was written for it 400 years ago. In other words, the cello never had frets that it lost, but the idea of putting frets on a bowed string instrument is not one that was only recently thought about. So when did we get to the idea of a fretted cello? This is a relatively recent idea. In the 1970s and around that time when rock music was topping the charts, many people wanted to play violin and other stringed instruments with the band. One of these instrumentalists was a violinist called Mark Wood.

He credits himself as being “the first to develop a fretting system that did not compromise the beauty and subtleties of a stringed instrument,” according to his website. He was looking to play in rock bands as a violinist, but he found that he was not able to be as loud as the other instruments, even with amplifiers, and he couldn’t hear himself to play in tune. It’s not clear who the exact first person was to develop the fretted violin, but he was among the first to achieve success with it. He later developed fretted violas and fretted cellos.

There were some advantages to this. As he said, he couldn’t hear himself to know if he was in tune, so with frets there was no need to worry about this. It is also easier to play quicker for some things since you don’t have to completely make contact with the string to the fingerboard. And, you would still play in tune.

Yet, with all of these advantages, no one really uses bowed fretted stringed instruments. There are a few reasons for this. The big obvious answer, at least for classical musicians, is intonation. Having good intonation means that you play your instrument in tune. If you’ve ever heard a beginner string player, you may notice that they are pitchy. This is because there are no frets on the instrument, unlike the guitar. String players have to learn how to play in tune without the use of any frets or markings of any kind.

When you are first starting to learn the instrument, your teacher may put some easily removable colorful tape or stickers on the fingerboard, like a fret, to help you learn where to put your fingers so that they are in tune, developing your muscle memory.

Having frets would help you play in tune, though, right? Not exactly. Professional musicians in classical music are always considering expressive intonation. This is a difficult concept to understand if you’re coming at it for the first time, but essentially musicians who play instruments that can play in between the notes of a piano sometimes make them a little bit higher or a little bit flatter to achieve different sounds.

In other words, certain notes played by a cellist, depending on the key and context, may not be exactly in line with the piano. If you’re playing in a group of string players, you may change how high or low the third of your chord is in pitch, without changing the note, in order to get a brighter or more mellow color in the sound.

This vast oversimplification is not meant to be exhaustive in any way. It is just one way of introducing an idea that you may not have known about before. There have been books and treatises written hundreds of pages long explaining the exact mechanics and science behind this idea and its practical application, and if you have an interest in this idea, there are many great resources available, the first being your private teacher.

So why would having frets not work for expressive intonation? The purpose of frets is that you don’t have to have good intonation – in theory, your finger can land anywhere within the fret, and it will not influence the pitch. The drawback is that you cannot influence the pitch if you want to. Expressive intonation is not really thought about in popular music styles, but in classical music it is what separates a good player from a stellar one.

Another more obvious drawback of frets is that you can’t achieve vibrato for the same reason. Vibrato is what makes stringed instruments sing like the voice and what gives them their unique character. Slides are also not possible – playing a chromatic scale on the guitar, for example, doesn’t go in between the notes the same way a straight glissando would on a slide whistle. Frets take out a lot of expressiveness from the instrument.

Jaco Pastorius, arguably one of the greatest electric bass players (or musicians) that ever lived, realized how much expressiveness was missing from his instrument and actually went the other way from frets. As the legend goes, he took a butter knife to his Fender Jazz Bass when he was 21 and removed the frets, calling it the “Bass of Doom.”

Fender caught on and began releasing fretless versions of the instrument, and many other bassists soon preferred the fretless instrument for the reasons described above: intonation, vibrato, slides, and expressiveness overall became much more attainable on a fretless instrument. 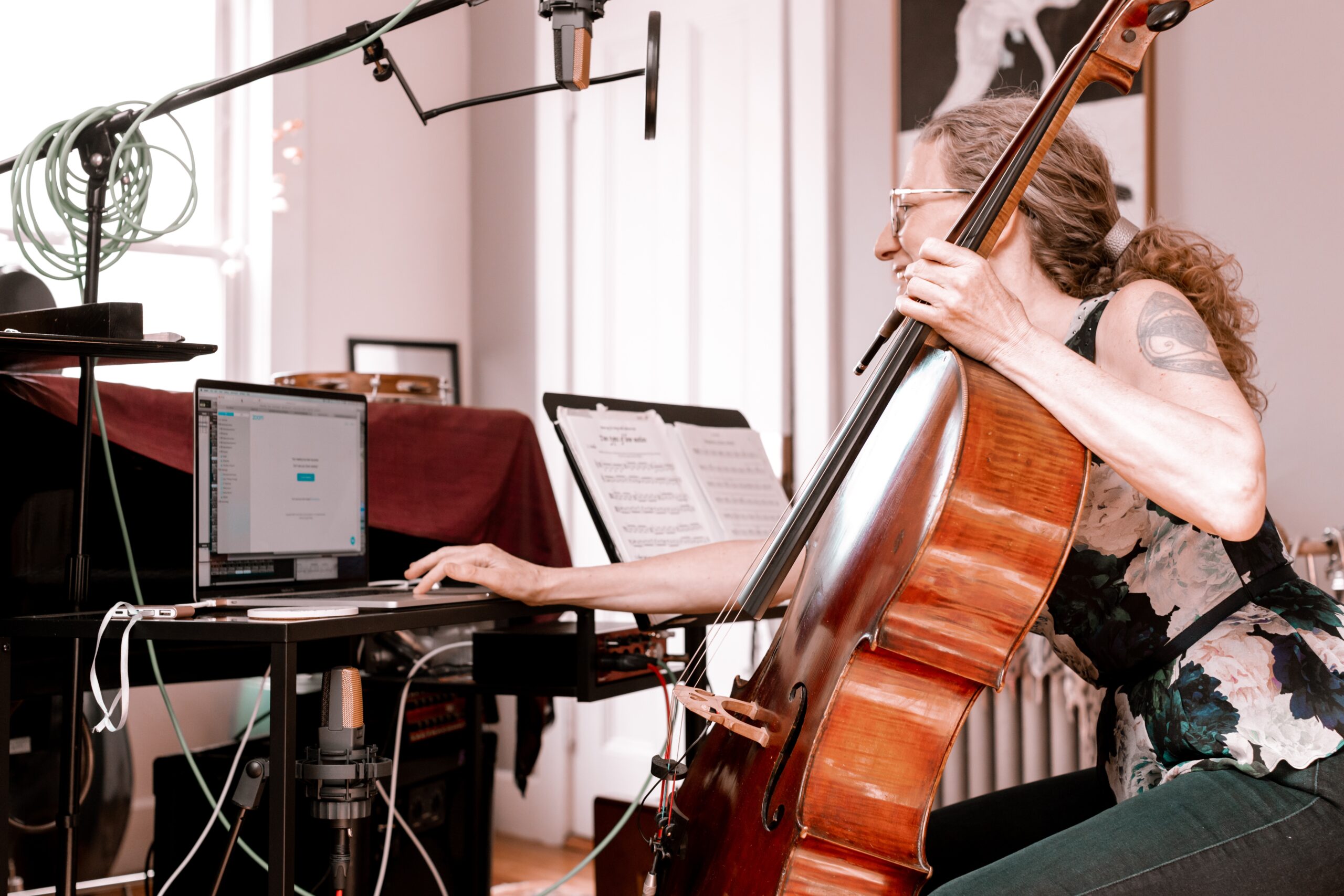 But How Do You Play in Tune without Frets?

Maybe you’re reading this article because you want to start learning the cello, and you think that learning to play in tune without frets would be impossible. While it takes time to learn to play any instrument, the comfort and “security blanket” you give up from being assured you will never play out of tune is worth far less than what you receive back from the instrument when you achieve colors you would have never imagined.

As the introduction said, fretted bowed stringed instruments are hardly used and are seen by professional players of all genres as more of a novelty gag rather than a serious instrument.

When Should You Buy a Fretted Cello?

The gist of this article is that if you’re not sure what you’re getting into, there’s no good reason to buy a fretted cello. There are few applications where it would prove itself a good idea. Maybe you play in a rock band as a cellist and are looking for a specific thing – a durable plastic or carbon fiber instrument that has a built-in pickup to plug into an amp or pedals, and you come across one with frets. If your music doesn’t require the same kind of expressiveness or detail that you would get from a regular cello, then there’s nothing wrong with trying a fretted instrument. This would be about the only scenario for getting a fretted cello.

If you are fairly new to the cello but want to try what it feels like to play with frets, consider getting some temporary frets. You can stick them to your fingerboard and get the experience of what it’s like to play a fretted cello before actually putting the money down to buy an instrument. If you have played the cello for a long time and know what you’re getting into, then go ahead and get a fretted cello. If you’re new to the instrument, it is unwise to deny yourself the musical experience that motivated you to explore the cello in the first place. Yes, playing without frets can be hard, but when you look back at your first experiences with the cello, you’ll realize how quickly you have made progress.

For more interesting readings check out: